Getting to the Core of Ray’s Apple Market

Home/Blog/Getting to the Core of Ray’s Apple Market
­

Getting to the Core of Ray’s Apple Market

Ray’s Apple Market built its reputation on excellent service. Before opening his first store in Seneca, KS, Ray Floersch worked in the meat department at a local grocery store, and he disliked how the owner treated customers. In 1965, he founded Ray’s Apple Market because he felt he could do better. Over 50 years later, his son Mike describes the relationship between store and shoppers. “We have a partnership with our customers. We want our customers to trust us. That’s how I feel about Zero Zone: they’re a partner. They trust me, and I trust them.” This trust between Ray’s Apple Market and Zero Zone developed over the course of their 2017 installation.

The “Apple” in Ray’s Apple Market comes from Associated Wholesale Grocers (AWG), whose “Apple” merchandising approach focuses on perishables. “We feel like that’s where we need to be the best… perishables. You can buy groceries about anywhere today, but if we have the freshest meat, freshest produce, people will shop with you,” explains Mike. Mike chose the open Reveal Merchandiser™ for produce with its great presentation. For all other product, he switched from open cases to Zero Zone reach-in cases. “I was a little nervous about putting things behind doors, but I’m so glad I have,” Mike said, citing the LED lighting and tall doors making product very visible.

Ray’s Apple Market reduced their monthly energy bill by switching to Zero Zone display cases and refrigeration systems. Previously, they used single compressor units for each display case, but now all display cases run from two rack systems. “As the months went along, we could see our kilowatt [usage] lowering. I’m thinking we’re going to be looking at about a 20,000 kilowatt drop, which is about a 25% drop in energy usage,” said Mike. “Zero Zone helped us cut our energy costs, which we can pass on to our customers.”

With this switch, Ray’s Apple Market went from using multiple refrigerants—with some compressors still using dated R-12—to using a single refrigerant across the store. Mike decided to use R-448A because of the ever-changing EPA regulations and installation costs. “The copper tubing was smaller. When we compared the lines we took out to what we put in, it was almost like, ‘Really? Is this going to work?’ And it’s been great.”

Mike praised the Zero Zone sales representative for attending each installation—even arriving before Mike—to make sure everything went smoothly. Mike is grateful for Zero Zone. “I do not have to buy from Zero Zone, but when I get the kind of response they give me, then I’m sold.” 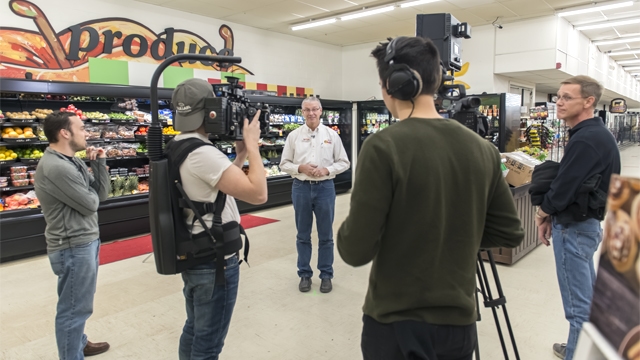 About the Author: Jessica Nemitz